Zev Robinson is an accomplished artist, who turned to video making just a few years ago, but with intensity and purpose. After producing Dinastía Vivanco, about one of the Rioja’s most innovative wineries, followed by Life on the Douro, about the little known yet outstanding wine region in Portugal, he is now promoting his latest film: Arribes, Everything Else is Noise, which is currently experiencing international screening success. I’m including Zev’s story here, in his words, and in mine, because I find him to be a good example of the lone, determined filmmaker who, with a minimal budget but with a big heart and a bigger belief in his vision and the subject he is presenting, is able to successfully reach his audience and, as I riff on the title, make some noise. What I see that contributes to his success is that Zev, a self-taught filmmaker and self-promoter,  is consistent in his vision, in what he wants to present to the world, so by now he probably has a solid following. What is particularly interesting about his work, is that Zev is using the high tech tools presented to him: HD cameras, social 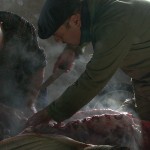 media, digital video, planes, trains and smartphones, to present a slower, older, quieter world: where people take the necessary time to produce essentials such as food and wine; where century’s old cultural heritage is preserved; where no or very little technology seems to interrupt man’s ongoing dialogue with the land–whether it be winemaking or pig slaughtering.

Here is what Zev writes about his latest production:

I was invited to visit Arribes to include in an ongoing documentary project which at the time was about wine production in Spain (but has now been expanded to include food and festivals). When we arrived, I saw other things that I hadn’t seen before in other regions of Spain, very small villages of 50-100 people living in stone houses with small doorways, a very traditional – and sustainable – way of life reminiscent of what the rest of Spain must have been like about 50 or 60 years ago. The people we interviewed barely finished primary school, very few went to secondary school, and started work at a very young age. 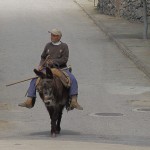 The other thing that interested me was the fact that there were several people and families who moved to what is an isolated, abandoned region from Madrid, Barcelona, the UK, and elsewhere, looking for a different set of values and quality of life, all of them with the necessary fortitude and pioneering spirit that it takes to start anew without many of the modern conveniences most of us take for granted.

So I started a new documentary that slowly took shape over 6 trips to the region over a period of four years. Each trip led to new discoveries, interviewing people with unique histories – someone who, as a boy in the 50’s, smuggled goods across the river to Portugal and back, a weaver who worked in silence in a small room since he was a child, a woman who went to tend her family’s sheep and goats by herself in the mountains as a child, denied going to school which is what she wanted the most, and a couple who never owned a car or tractor, walking to other villages to go to the communal dances, among other stories.

A picture of a self-sufficient region emerged where people produce 80-90% of their own food, making it a real, concrete example of a sustainable environment, with lessons that could be applied to other areas. The film shows the simplicity, benefits and values of traditional life, but without glossing over the harshness of life as it was.

The film premiered in London in November, then was shown in Zamora at two private screenings where 1000 people from the region came out to see it, and for a limited run just before Christmas at Multicines Zamora. It will be showing in Madrid on May 22, scheduled for a screening in conjunction with SlowFood in Geneva, and we’re working on events in Paris and elsewhere in Europe. Dark Hollow Films http://www.darkhollowfilms.com/ will be its North American educational distributor. I’ve just started submitting the film to festivals, and will know the results over the coming months. In general, we’ve just started what will be a promotional campaign that will go on throughout 2013.

And that’s how it’s done, folks! Slow easy. Nothing loco.

As a bonus, here’s a synopsis of the film:

Arribes: Everything Else is Noise portrays the bittersweet lives of the inhabitants of this isolated region of NW Spain, where sacrifice and hard work began at an early age, but where a simpler, basic life-style 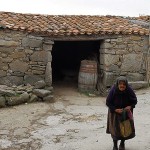 made room for a sense of community and happiness.

As people reflect on never owning a car or tractor, walking from village to village to go to communal dances, tending goats and sheep by themselves from pre-adolescence, killing the animals that they had fondly raised, and remembering the region when it was a green paradise, a picture of a eco-system emerges where everything is used, recycled, and interconnected. Producing 80-90% of their own food, there has always been a strong, direct relationship between food, agriculture, and the people who tend the land, making it a concrete example of an healthy, sustainable environment with lessons that can be applied elsewhere. The documentary raises questions about our own way of living and if changes in lifestyles, priorities and population structures are essential for a more sustainable future.

With the depopulation of the countryside, the erosion of this way of life is contrasted with the views of a younger generation who moved there from Madrid, Barcelona and the UK, attracted by what Arribes had to offer.

The sometimes funny, sometimes sad anecdotes are accompanied by details of everyday countryside life depicted with a sense of poetry and care, bringing into focus values often forgotten in a contemporary society with other priorities.