Beyonce did it. And is still doing it. Unless I’ve missed another such launch, I think she has pioneered and mastered the art of music sales and connecting with your audience in a complete, savvy, social media campaign. She and her agency prove to be absolute digital natives, and teach all of us a lesson in audience engagement. From the iTunes publication of her album, videos and all, with its surprise Twitter whisper (the spreadable, delicious secret) that turned into a full fledged outburst of chatter and that, truly in the native language of the platform, spread among her fans and beyond in a matter of hours, busting iTunes at its seams, to the latest #AskBeyonce event through Instagram that I just watched on video.* 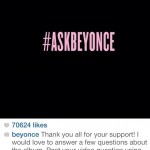 In the video, Beyonce mentions her business, and extends her thanks to the agency that she hired for her launch, an “underground” team that she says others didn’t believe in. Smart woman that she is, she does not mention their name–she wants to keep them all to herself. Well, hat’s off to her and to the agency. They speak the language of the community. And they let the community speak for themselves: let the wildfire announcement of her album spread from tweet to tweet; gave them the opportunity to ask questions about her private life, her album, her music, through Instagram, and then gave some instagrammers their own moment of “fame” with their video on video on our computer screens (a meta millennial move if there ever was one–what say you, Gary Shteyngart?). Sure, it helps to be Beyonce and have a following in the millions already, but leveraging them in just the right way, with a combination of public display and intimacy, the way she does so artfully in the video #AskBeyonce, takes thought and attention, and lots of experience. Another sign of intelligent marketing, and very much in tune (so to speak), with the way the music world is functioning, Beyonce’s business may be “indie” but, from what I’ve read in an Forbes article by Zack O’Malley Greenburg, also partnered with Sony for the launch. A nice way to bolster your production budget. But, as we often like to emphasize in our workshops and to our clients, there is no online without offline, whether it be in the music or the film world. As O’Malley Greenburg points out, although the iTunes sales of her album “Beyoncé” were impressive in the first weekend (and no one seems to be mentioning how it has been doing since then; I guess I’ll have to research it), the success of its buzz, the proof in the pudding, will be seen more clearly when she takes off on her world tour.

Here’s the video of the Director’s Cut event, in case you haven’t seen it:

But, back to the audience, the fans, and their special role and shared power in this surprise release. Bill Werde, the editor of Billboard, explains well the work that Beyoncé and her team achieved:

‘I think on one hand what it really speaks to is the emerging power that artists have to go direct to fans,’ he said.
‘One of the things that’s most impressive about this Beyonce release is she’s controlling the conversation around it to a certain extent.
‘She’s controlling the initial experience that fans are having, so it’s not about what critics are saying, it’s not about, “Here’s what the album means” and explaining it, it’s about, “Hey, I put my art together for you, videos, songs, and you get to have the joy and experience of forming your own opinion on the work as I intended to be presented”.’

And there’s more. A student made an excellent point in a work shop I gave at Berklee College of Music Valencia: the timing of the al-bomb drop couldn’t have been better. It was the end of season of “Scandal”, followed by thousands of young women who are a part of Beyonce’s core audience, her “beehive”. These followers were already on Twitter, frantically discussing the final events in the series’ episode. Then, boom, after the episode finishes, the twitterers got the additional gift of “Beyoncé” whispered to them, right in the midst of their discussion, and the beehive is whipped into a frenzy. A double whammy.

*The more I reflect on it, the more skillfully I understand she touched on/ referenced every topic that is of direct importance to her audience. It’s not just about her; it’s about them: God, family, community, woman empowerment, business, insecurities, motherhood, entrepreneurship, innovation.