I’ve been in New York since May 12th. Happily, my trip coincided with the opening of the film Untouchable Girls at the Cinema Village on Friday the 13th. I quickly purchased tickets for my mother, a friend of hers and myself, anticipating a full theater. I was right and very glad to see a good audience attendance. Given that the Topp Twins themselves were going to be there to yodel for us and participate in a Q&A, with Melissa Silverstein from Women and Hollywood, I knew it was going to be a complete evening. What a wonderful way to get back into the NYC groove, down in the Village and at one of the city’s lovely, age-old independent movie theaters. Jim Browne and Blandine Mercier of Argot Pictures were also in attendance, as was the film’s director, Arani Cuthbert. 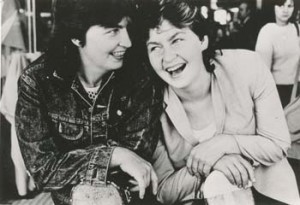 The Topps are an extraordinary duo, who have been entertaining audiences in New Zealand and beyond since they were young teens, busking in the streets, traveling around the country on a tractor caravan and showcasing at clubs or private parties, with everything else in between. The film is a frolicking portrayal of their life and activities, with a strong message about identity, self-empowerment, love and community activism, as well as overcoming challenges, all perfectly expressed in both the film’s title and their trademark song’s lyrics: Untouchable Girls–“we’re untouchable, untouchable, untouchable girls/ We’re stroppy, we’re aggressive, we’ll take over the world”.

A recent article in the NY Times wraps up nicely what the film is about and how we can experience it. Here is a selected quote:

You may never have heard of Jools and Lynda Topp, country-singing lesbian twins from New Zealand, but it’s not because of their retiring personalities. Boisterous, big-voiced and built to last, these musical sisters have carved successful careers by doing what most people only dream of: that is, exactly as they please.

That much and more is made ebulliently clear in “The Topp Twins: Untouchable Girls,” Leanne Pooley’s unabashedly admiring documentary about a double act that defies logic as much as convention. Merging old-fashioned comedy routines with up-to-the-minute politics — all of it enabled by fun-loving personalities and a gift for rousing original songs — the ladies emit a genuine warmth that reels audiences in.

“On paper, they should be commercial death,” the comedy writer Paul Horan says, and it’s not hard to see why. Attired in men’s suits and yodeling up a storm, delivering homespun monologues about their dairy farm upbringing and crooning parochial ditties like “Calf Club Day,” the Topps — out-and-proud jokes aside — could have been regulars on “The Lawrence Welk Show.” Yet their act has touched a cultural nerve in their native land, its anarchic send-ups of Kiwi familiars like the boozy farmer and the daffy bowling lady delivered entirely without rancor. — Jeanette Catsoulis, NY Times May 12, 2011