Still a few tickets left for the Dallas premiere of Crazy Wisdom–8 to be exact. But with the screening still a few weeks away, we think it’s safe to say that the first crowd-funded screening in Dallas is a success.

We, MocaMedia, provided the catalyst. I’ve been jones-ing to see Crazy Wisdom (CW) for several years, ever since I heard a doc about Chogyam Trungpa Rinpoche (CTR) was in the works. (Yes, I’m a student of Shambhala Buddhism, founded by CTR, former monk/meditation master/artist/hard drinker/lady lover/Naropa University creator.) I supported the film’s Kickstarter campaign–my reward was black-and-white, candid photo of CTR taken by the filmmaker, which I treasure. 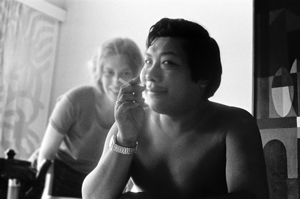 When the film became available for community screenings–picked up by Alive Mind Cinema–I suggested a partnership for the Dallas premiere to Dallas Shambhala Meditation Center and Dallas Videofest (public face of the Video Association of Dallas, on whose board I serve). Bart Weiss, Videofest Artistic Director, had wanted to screen CW in last year’s Videofest: this was an easy yes.

So we already had the partnership in place and the target date of April 4, 2012, 25th anniversary of CTR’s parinirvana (death) in mind when Tugg contacted Dallas Shambhala, hired by Alive to crowdfund screenings of CW, and reach out to the network of Shambhala centers (about 165 world-wide).

The model instantly made sense: no risk to venue nor sponsoring organizations. Your audience reserves tickets. Just like Indiegogo, Kickstarter, Groupon, etc., if the goal’s not made, i.e., X number of tickets sold by a specific date (goal set by the venue), money’s not taken from anyone’s account. The sponsoring organization (or individual) suggests theater, date, and film via Tugg. And the theater decides whether or not to participate.

Just like other crowdfunding platforms, success on Tugg requires social media support. Dallas Videofest blogged the premiere. Dallas Shambhala posted on its website. Both used Facebook and Twitter to update re ticket sales, with me in the driver’s seat for Shambhala. I also posted the event a couple of times on Moonlady, a dynamic DFW-area listserve for all kinds of announcements (everything from nature walks to yoga events to astrology), and suggested Meetups for synergistic groups: Rudra Meditation, Dallas Meditation, and the awesome, super-Meetup Urban Mosaic Groove (founder Siobhan is a force of nature–she’s created a Meetup with dozens of events every month, worth its own blog). Siobhan added a pre-premiere dinner at a nearby restaurant for Urban Mosaic.

Also important in the outreach: KTC Dallas announced the screening in their newsletter. KTC is a meditation and study center linked to the Karma Kagyu lineage of Tibetan Buddhism, with a natural connection to CTR, who was a holder of that lineage.

To sum up, like every successful screening, this premiere required plenty of sweat equity, in the form of planning and getting the word out. But no money was risked.

Tugg has created a model whose time has come. DIY filmmakers, take notice! Big distributors are: Alive is a division of Kino Lorber lisinopril 10 mg tablet.

Close Menu
We use cookies to ensure that we give you the best experience on our website. If you continue to use this site we will assume that you are happy with it.OkPrivacy policy